Flink and Kafka have both been around for a while now. They continue to gain steam in the community and for good reason. They provide battle tested frameworks for streaming data and processing it in real time.

I’m working on a few projects to properly leverage stream processing within our systems. We have a lot of streaming data, however most of those streams are not processed in real time. There is a ton of potential power in real time processing that we currently aren’t tapping into. A lot of our systems still rely heavily on batch processing. I think there will always be a place for processing data in batch, but for some workflows, near real time processing is required. For example, if you are working on something like fraud detection, you need to know what is happing as fast as possible. Processing data hours later to detect fraud that has already happened isn’t usually that helpful.

I think we are finally ready to take on these challenges and really put some effort into building out our stream processing platform.

Since I was fairly new to building stream processing pipelines, I decided it would be helpful to build a basic streaming example project for understanding and reference on the systems involved. Hopefully, this post and the code that goes with it, will also help anyone else getting started with Flink processing.

All the code and examples here are for educational purpose and aren’t meant for any production use cases.

At the end of this post we’ll have used docker to spin up Kafka, Zookeeper, and Flink in separate containers. Using those containers, we’ll produce open Wikipedia data to a Kafka topic, process that data within a Flink job, then write that processed data back to another Kafka topic. This should help us get a better idea of how these systems work together and hopefully allow us to become more comfortable developing streaming pipelines.

Here are the main tools/frameworks we will be using in this post:

I won’t be diving deep into any of these so feel free to check out the links above if you’re not familiar. I’ll be using them in combination to try and understand their interactions with each other better. And more specifically, how Kafka and Flink work together. Zookeeper is needed by Kafka to handle distributed consensus, and Docker is the vehicle we will use to run all these things inside of.

Here is a quick diagram of the pipeline we will be working towards building:

This is a fairly straight forward streaming pipeline so it should be a good starting point for us.

The first step is getting our Docker container built.

The code for this post lives in this GitHub repo. All of the commands run in this post assumes that they are run from the foundations/kafka-flink-streaming directory. If you’re following along you can clone the repo and cd to this project directory:

Once in this directory we can run the following to build our base container for all our applications:

This will build a Docker image locally. Here is the code we use to generate this container:

You’ll notice we download the various packages we’ll need directly from Apache. Normally you’d want to use mirror sites which are closer to you for faster downloads. You can then get all the verification files from Apache and verify the files you downloaded from the mirror.

We also just install everything that we will need into one large Docker container. Normally you’d want to have different containers for each application so you can keep the containers smaller and more light weight. Here we are just keeping it simple and using one big container for all of our needs.

Now that we have a base container we can start spinning up our services. This can be done easily via docker-compose:

In this compose file we create all the containers we will need to run our application. You’ll see a few areas of the code with something like the following:

This is to wait for the service, in this case Kafka, to be fully ready before we start our process. I noticed there are instances when docker thinks the service is ready but if you try to access it, you might get availability errors. This code is just a way to avoid those issues. There are probably better ways to handle this but should be okay for our use case.

I also run a standalone container to create the Kafka topics we will be using in our pipeline. This compose service is named create_topics and runs the following code:

Which will create our topics and then exit.

You’ll also notice we need to spin up job manager and task manager containers for our Flink cluster. This should be enough for our purposes of running a simple streaming job locally. You should now be able to check out the Flink UI locally at localhost:8081 which will look like this: 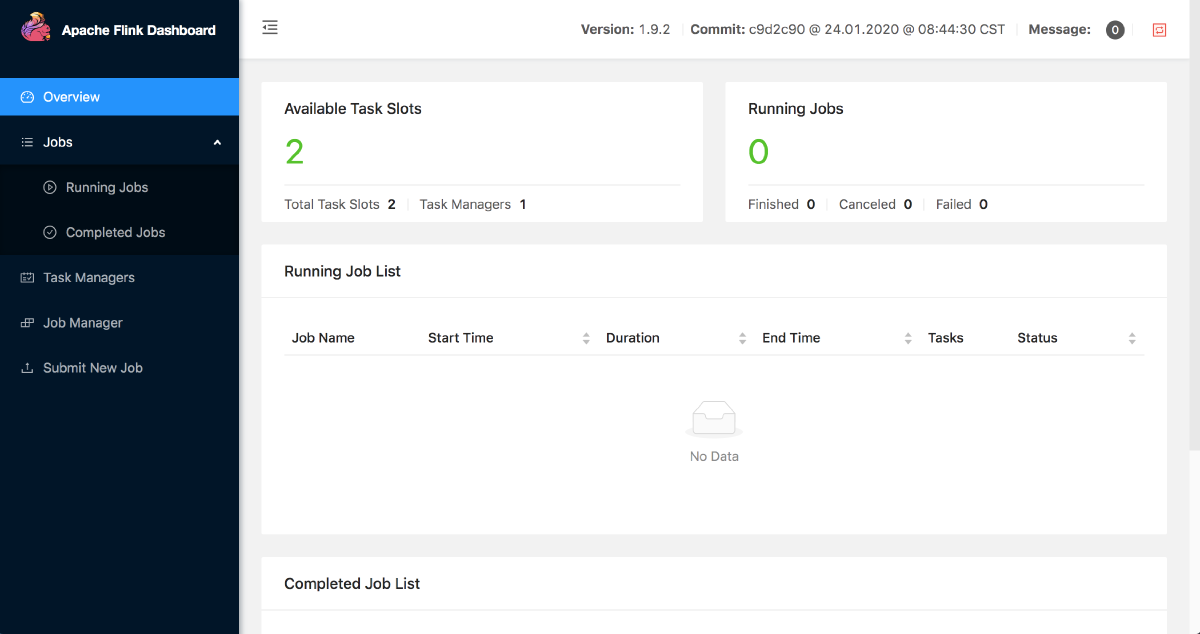 We are now finally ready to write our Flink job, compile it, and submit it to our Flink cluster.

Our Flink application will be reading Wikipedia edit data flowing through one of the Kafka topics that we just created. Its great Wikipedia provides this data for anyone to play with and is a prefect way for us to get more comfortable with stream processing. You can find more about the data source here and take a look at the expected schema here. For records that give the “new” and “old” article sizes (in MB) we will be calculating the average edit size (absolute difference) over a tumbling 10 second window. For those new to Flink, windowing can be a little confusing, I’d recommend looking at the Flink blog post which introduces how windows work within Flink.

The main class for this application looks like this:

I’ve left out imports here but the full source can be accessed here.

The high level flow of this application is that we setup our job’s properties, create an execution environment (this is what we’ll use to actually run the job), set up our source (the “wikiedits” topic), process the incoming data, set up our sink (our output topic), and finally tell Flink to execute the job.

The observant reader will notice that I am using a class called Average to help us do our averaging. This is a custom class implemented here:

Flink provides an AggregateFunction interface that we can use to do any custom aggregations on our input data. Here I am just doing a simple average, but this can be as simple or complex as your use case dictates.

Now that we have our Flink application code together, we should be able to compile the code and submit the job to be executed. We can do this within a docker container using the image we already created.

This code compiles our Flink application within a container and runs it in our Flink cluster. You’ll notice that we use a _m2_cache local directory in the docker run command. This will help us cache the maven dependencies so that if we want to recompile we don’t need to pull the full dependencies every time.

You should now be able to verify that your job is running from the Flink UI. Which should look something like this:

Now that our Flink job is running we can start producing real time edit data from Wikipedia:

This will just run a container that reads edit data from Wikipedia and outputs it to our wikiedits topic. You’ll want to run this in a new terminal window since the process runs in the foreground. So we won’t be able to use that terminal window unless we kill the process with Ctrl-C. Alternatively, you could update the code to run in the background.

We can now watch the data processed in real time by consuming from the Kafka topics we already setup:

The above commands can be run to verify our application is behaving as expected. Don’t forget to use Ctrl-C in the terminal to stop consuming from the Kafka topics.

Once you are ready everything can be shut down using docker-compose:

Be sure to shut down any other containers that have been started. You can verify everything has been stopped by running docker ps and checking there aren’t any other active containers.

This was a really fun project and I learned a lot about how Flink and Kafka work together. These frameworks are very deep, and there is much more to learn from both of them. I was surprised by how straight forward it was to get these distributed systems to work with each other. There are a lot of great tutorials and documentation for both of these systems which really helped speed things up.

This example pipeline is not even close to running these systems within a production environment but I hope it helps provide a starting point for anyone else diving into the wonders of stream processing. Happy coding.